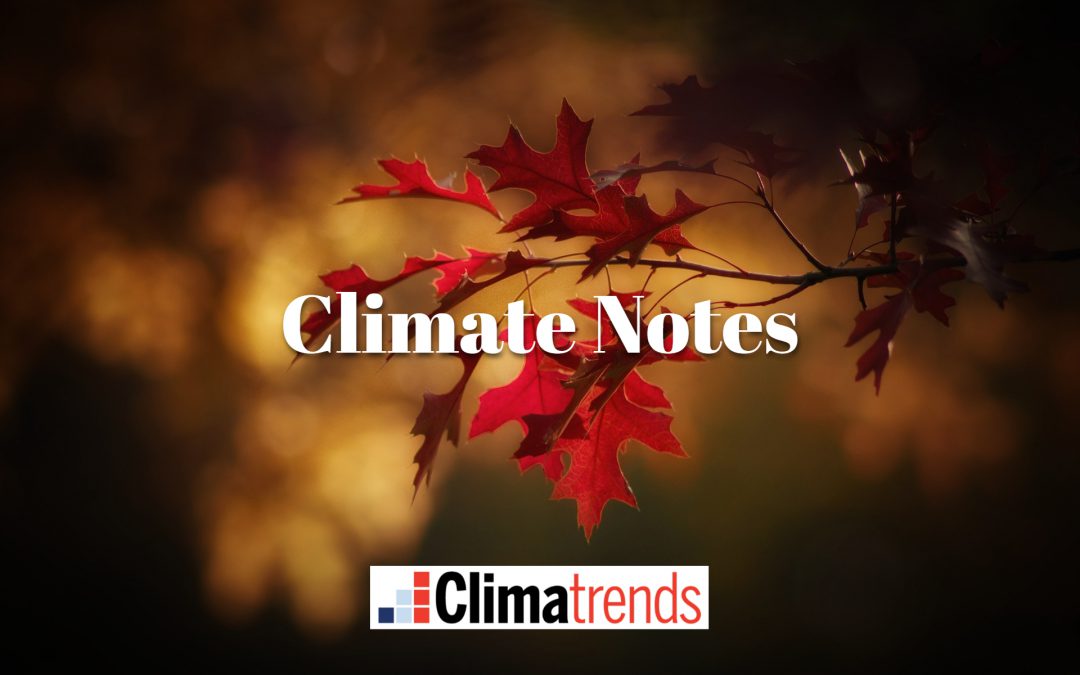 In NYC After Ida, Biden Calls Climate “Everybody’s Crisis”. Associated Press reports: “President Joe Biden declared climate change has become “everybody’s crisis” on Tuesday as he toured neighborhoods flooded by the remnants of Hurricane Ida, warning it’s time for America to get serious about the “code red” danger or face ever worse loss of life and property. Biden spoke after walking streets in New Jersey and then Queens in New York City, meeting people whose homes were destroyed or severely damaged by flooding when Ida barreled through. The storm dumped record amounts of rain onto already saturated ground and was blamed for more than a dozen deaths in the city…”

Fall is Warming. As we begin meteorological Fall, we take a look at how climate is affecting the season. Data show that fall warmth tends to linger longer than it did a generation ago. Climate Central has a good summary here: “Fall is getting warmer due to climate change. About 95% (234) of the 246 cities analyzed have warmed since 1970. And 57% (134) of those cities have warmed at least two degrees. Of the 246 cities, 68% (167) have seen at least seven more days of above-average fall temperatures compared to 1970. Ten locations recorded one additional month of hotter-than-normal days. Warmer fall temperatures raise public health risks such as heat-related illness, mosquito-borne disease, pollen allergies, and worsening air pollution...Among the 246 cities analyzed, 95% (234) experienced an increase in average fall temperatures since 1970. And 57% (134) of those cities experienced warming of at least 2°F. Fall warming is fastest in Texas and the Southwest Region: The five greatest increases are seen in Reno, Nev. (7.6°F), Las Vegas (6°F), El Paso, Tex. (5.6°F), Tucson, Ariz. (5.4°F), and Phoenix (5.3°F)…”

Climate Change’s Fingerprint Seen in Ida Flooding. StateImpact Pennsylvania has a story that connects the dots: “The remnants of Hurricane Ida caused flooding and several deaths in Pennsylvania. Scientists say climate change is one reason the storm was so powerful. Climate change — caused mostly by the burning of fossil fuels and other human activities — has increased the earth’s temperature already by about 2 degrees Fahrenheit. The recent United Nations’ report on climate change concluded that human-caused climate change increases the amount of precipitation in hurricanes and tropical storms. This has been supported by a mounting body of evidence that continued warming is making storms more intense. Jon Nese, a meteorologist at Penn State, said in an email that storms like Ida have “a fingerprint of climate change” layered onto them...”

Climate Change Helped Intensify Hurricane Ida: A Potential Preview of What’s To Come. Here’s a clip from a post at phys.org: “…What started as a disturbance in the Atlantic Ocean quickly grew to what could be the worst hurricane to hit Louisiana since Hurricane Katrina in 2005. While scientists are uncertain whether climate change will increase the frequency of hurricanes, one thing is clear: Climate change is here, and it’s making these storms stronger and more destructive. “Until recently, it was common to think of climate change as a problem for future generations, saying people in the future will have to deal with it,” said Andrew Dessler, a professor in the College of Geosciences at Texas A&M University. “But now it’s quite clear that we are the people of the future. The future has arrived, and we are having to deal with it now…”

Climate Change is Driving Extreme Weather Events Around the World. The World at pri.org has perspective, including an interview with climate scientist Michael Mann: “…A decade ago or more, we sort of had to tease out of the data the impacts of climate change, you sort of…had to squint to see them in the data,” Mann said. “Today, you no longer have to do that. The impacts have become so profound, that we can see that these extreme weather events that are playing out right now across the Northern Hemisphere this summer have no precedent as far back as we have records.” What’s more, the newest computer models are likely underestimating the impact climate change is already having on these extreme weather events, Mann added. So humanity is facing some unwelcome surprises, especially if we don’t act soon enough and aggressively enough to decarbonize our world…”

Christian Leaders Call For Climate Action: Climate Nexus has headlines and links: “The heads of the Roman Catholic Church, the Eastern Orthodox Church, and the Anglican Communion issued an unprecedented joint statement calling for action to address climate change and social inequity. “Today we are paying the price [of the climate emergency],” the statement said. “Tomorrow could be worse…Our children’s future and the future of our common home depend on it.” The statement appealed to delegates at the upcoming COP26 U.N. climate summit to “cry of the earth and of people who are poor … for the sake of the earth which God has given us.” Pope Francis is expected to attend COP26, scheduled for early November in Scotland, and has asked Christians to pray world leaders make courageous choices. The Vatican plans to host a major gathering of world religious leaders and scientists ahead of COP26 to take a common stand against the climate crisis and raise the stakes of the Glasgow conference. Co-signer and former oil executive Archbishop Justin Welby of the Anglican Commission has previously been outspoken about the moral crisis of climate change, but has failed to fully divest his Church of England from carbon-intensive companies, arguing it can force more change on the fossil fuel industry as a shareholder.” (Reuters, NBC News, ABC News, Sky News, HuffPost, Guardian, Bloomberg $)

Nearly 1 in 3 Americans Experienced a Climate Disaster This Summer. The Washington Post (paywall) explains: “Nearly 1 in 3 Americans live in a county hit by a weather disaster in the past three months, according to a new Washington Post analysis of federal disaster declarations. On top of that, 64 percent live in places that experienced a multiday heat wave — phenomena that are not officially deemed disasters but are considered the most dangerous form of extreme weather. The expanding reach of climate-fueled disasters, a trend that has been increasing at least since 2018, shows the extent to which a warming planet has already transformed Americans’ lives. At least 388 people in the United States have died due to hurricanes, floods, heat waves and wildfires since June, according to media reports and government records…”

Beyond Human Endurance. The Washington Post (paywall) examines how some parts of the planet may become to hot and humid for humans to survive during the summer season; here’s an excerpt: “…The wet-bulb temperature that marks the upper limit of what the human body can handle is 95 degrees Fahrenheit (35 Celsius). But any temperatures above 86 degrees Fahrenheit (30 Celsius) can be dangerous and deadly. Horton and other scientists noted in a 2020 paper that these temperatures are occurring with increasing frequency in parts of the world. To put things in perspective, the highest wet-bulb temperature ever recorded in the Washington region, known for its muggy, unbearable summers, was 87.2 degrees (30.7 Celsius). “Extreme humid heat overall has more than doubled in frequency since 1979,” the study’s authors wrote. These conditions are reaching that deadly threshold in places like South Asia and the Middle East and could regularly cross it by 2075, scientists say…”

Overlapping Disasters Expose Harsh Climate Reality: The U.S. Is Not Ready. The New York Times (paywall) reports: “In Louisiana and Mississippi, nearly one million people lack electricity and drinking water after a hurricane obliterated power lines. In California, wildfire menaces Lake Tahoe, forcing tens of thousands to flee. In Tennessee, flash floods killed at least 20; hundreds more perished in a heat wave in the Northwest. And in New York City, 7 inches of rain fell in just hours Wednesday, drowning people in their basements. Disasters cascading across the country this summer have exposed a harsh reality: The United States is not ready for the extreme weather that is now becoming frequent as a result of a warming planet. “These events tell us we’re not prepared,” said Alice Hill, who oversaw planning for climate risks on the National Security Council during the Obama administration. “We have built our cities, our communities, to a climate that no longer exists…”

More than 230 Journals Warn 1.5C of Global Warming Could Be “Catastrophic” for Health. Here’s an excerpt of a summary at CNN.com: “…Human health is already being harmed by the climate crisis, and the impacts could become catastrophic and irreversible unless governments do much more to address global warming, the editors of more than 230 medical journals said in a joint editorial Monday. The editorial points to established links between the climate crisis and a slew of adverse health impacts over the past 20 years: Among them are an increase in heat deaths, dehydration and kidney function loss, skin cancer, tropical infections, mental health issues, pregnancy complications, allergies, and heart and lung disease, and deaths associated with them...”

21st Century Storms are Overwhelming 20th-Century Cities. WIRED.com makes the case for resilient infrastructure: “…The city’s infrastructure, you see, was built in the late 19th and early 20th centuries, to withstand the sort of storm that comes every five to 10 years. Now brutal, record-breaking storms are an annual occurrence. What was left of Ida transformed the scene of everyday commutes into a disturbing reminder that climate change comes for us all. Wildfire thunderclouds in the West, blackouts in Texas, hurricanes in the South, torrential downpours in the East: “It’s all the stuff we said would happen 20 years ago,” says Zeke Hausfather, a climate scientist and the director of climate and energy at the Breakthrough Institute. “It’s just a little crazy to see it all happening at once...”

Economic Cost of Climate Change Could Be Six Times Higher Than Previously Thought. Phys.org has the story: “Economic models of climate change may have substantially underestimated the costs of continued warming, according to a new study involving UCL researchers. Published today in the journal Environmental Research Letters, the work by an international team of scientists found that the economic damage could be six times higher by the end of this century than previously estimated.Projections like this help governments around the world calculate the relative costs and benefits of cutting greenhouse gas emissions...”