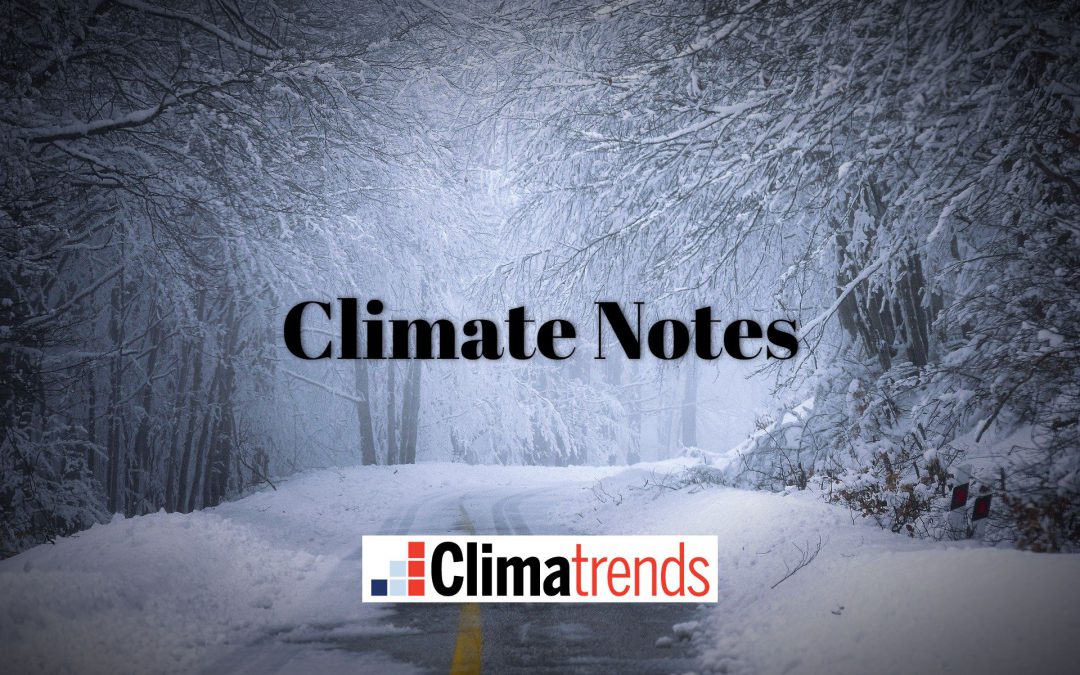 Love Snow? Here’s How It’s Changing. What are the trends? Less snow overall for much of the western USA, but an apparent uptick in amounts for some northern tier states. A story at Scientific American analyzes the snow trends: “…In many places, a warmer, wetter atmosphere might simply lead to an increase in rain. But the researchers note that the coldest parts of North America—namely, Canada and parts of the northern United States—might be expected to actually see an increase in the amount of snow that falls to the ground. The analysis seems to suggest this isn’t happening in some of those places. Other complex factors are also at play. In Canada, some research has found that the point in the season when snow is at its deepest is happening earlier and earlier in the winter. And snow seems to be melting faster once it’s on the ground. This could help explain why the overall trend in snow depth, when averaged across the entire winter, appears to be declining…”

New Climate “Normal” for Atlantic Hurricanes Shows More Frequent and Extreme Storms. A post at Capital Weather Gang caught my eye: “Every 10 years, the National Oceanographic and Atmospheric Administration revises the baseline of what weather and climate conditions are considered “normal.” The most recent normals for Atlantic hurricane activity will soon be released, and a preview reveals a spike in storm frequency and intensity. During the most recent 30-year period, which spans 1991 to 2020, there has been an uptick in the number of named storms and an increase in the frequency of major hurricanes of category 3 intensity or greater in the Atlantic. That comes as no surprise amid a spate of extreme hurricane activity that has featured seven Category 5 storms swirling across Atlantic waters in just the past five years…”

“Power Companies Get Exactly What They Want”: How Texas Repeatedly Failed to Protect Its Power Grid Against Extreme Weather. Is the grid ready for super-sized weather? Here’s a clip from an eye-opening story at ProPublica: “…As millions of Texans endured days without power and water, experts and news organizations pointed to unheeded warnings in a federal report that examined the 2011 winter storm and offered recommendations for preventing future problems. The report by the Federal Energy Regulatory Commission and the North American Electric Reliability Corporation concluded, among other things, that power companies and natural gas producers hadn’t properly readied their facilities for cold weather, including failing to install extra insulation, wind breaks and heaters. Another federal report released three years later made similar recommendations with few results...”

Want to Cut Emissions that Cause Climate Change? Tax Carbon. So says a new paper highlighted at Ohio State University: “Putting a price on producing carbon is the cheapest, most efficient policy change legislators can make to reduce emissions that cause climate change, new research suggests. The case study, published recently in the journal Current Sustainable/Renewable Energy Reports, analyzed the costs and effects that a variety of policy changes would have on reducing carbon dioxide emissions from electricity generation in Texas and found that adding a price, based on the cost of climate change, to carbon was the most effective…”

Can the Market Save the Planet? FedEx is the Latest Brand-Name Firm to Say It’s Trying. The Washington Post (paywall) has the story: “Amazon, Walmart, General Motors, and now FedEx. The giant delivery company joined more than 50 other major corporations when it announced this week that it too aims to be carbon-neutral by 2040 — an effort to curb climate change. Executives say that a gathering cultural change is fueled by companies responding not only to shareholders but also to the growing urgency of climate change and the concerns of their own employees and customers. On Wednesday, FedEx promised to be carbon-neutral by 2040, 10 years faster than the timeline laid out by the Paris climate accord. The company pledged an initial investment of $2 billion to start electrifying its massive fleet of more than 180,000 vehicles and $100 million for a new Yale Center for Natural Carbon Capture…”