“Greenwashing” in Sports – Young Climate Activists Turn Up The Volume 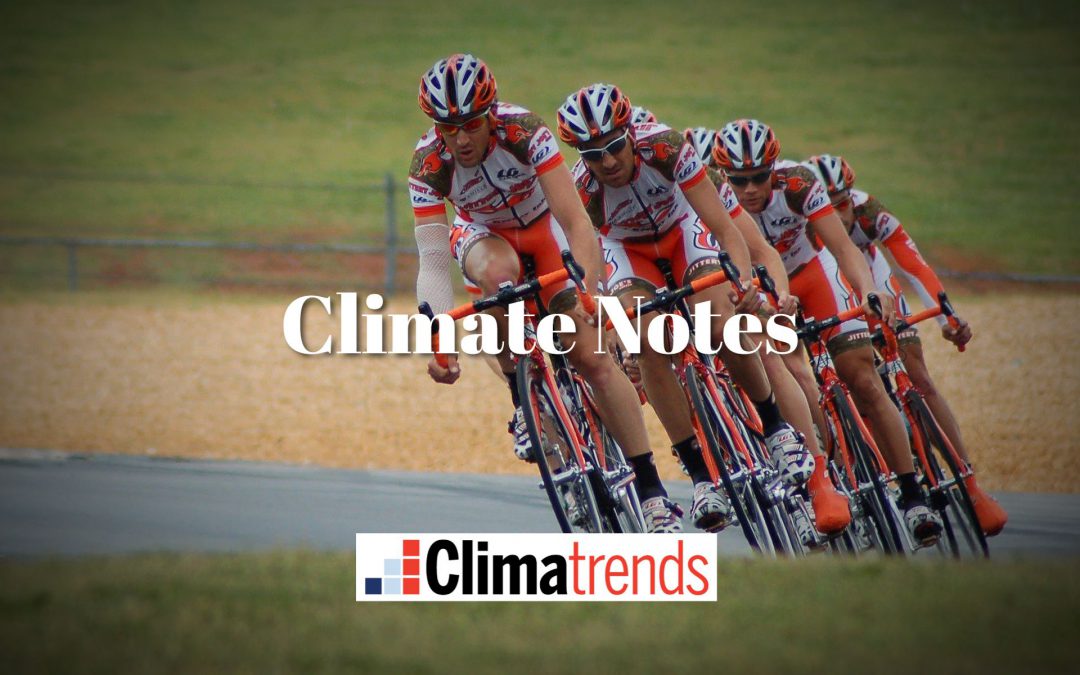 Major Climate Polluters Accused of “Greenwashing” with Sports Sponsorship. What is “greenwashing?” According to the Cambridge Dictionary, greenwashing is designed to “make people believe that your company is doing more to protect the environment than it really is.” Polluting industries are no stranger to greenwashing. Why are such industries pouring millions into sports sponsorships? The Guardian dives into companies trying to have it both ways: “Polluting industries are pouring hundreds of millions of pounds into sports sponsorship in an attempt to “sports-wash” their role in the climate crisis, according to the authors of a report published on Monday. The study reveals more than 250 advertising and sponsorship deals between some of the biggest corporate polluters and leading sports teams and organizations. Andrew Simms, a co-director of the New Weather Institute and one of the report’s co-authors, said: ‘Sport is in the frontline of the climate emergency but floats on a sea of sponsorship deals with the major polluters. It makes the crisis worse by normalizing high-carbon, polluting lifestyles and reducing the pressure for climate action…'”

Youth Climate Activists are Back with New, Sharper Demands for Counties and Corporations. Vox.com has the post; here’s an excerpt: “…This protest outside the bank’s Manila offices was one of hundreds held in 68 countries on March 19, organized by Fridays for Future, the youth climate activism movement started by Greta Thunberg, an 18-year-old Swede. This time, kids, teens, and adults showed up on the streets and on screens to call out world powers’ “empty promises” to cut greenhouse gas emissions. In recent months, the activists have persevered through quarantines and Zoom fatigue, and while Friday’s turnout didn’t come close to the 4 million who participated in the massive September 20, 2019, climate strike, the strong coordinated effort suggested they are still a force to be reckoned with…”

“The Old American Dream,” a Trap As the Floods Keep Coming. What worked in the 1970s may not work in the 2020s and beyond, according to analysis from The New York Times (paywall): “…Residents were stuck in dark, unheated homes in single-digit temperatures, fingers tingling and words slurring from the intense cold. Yet it also plunged them into a familiar agony: no electricity, waterlogged homes (this time from burst pipes) and certainty that they faced more of a frustration they knew all too well from wrangling with bureaucracies for help that was rarely enough, if it ever came at all. As temperatures and sea levels rise, as wildfire seasons grow more intense, and as hurricanes have become slower and stronger, more and more communities are grappling with friction powered by climate change — between practicality and the comfort of the status quo, the pull of home and the fatigue from pushing against the momentum of nature to stay there…”

“Winter is Vanishing” From the Deep Waters of Lake Michigan. CNN.com highlights results of new research: “As the globe continues to warm at an astonishing rate due to climate change, winter is shrinking at depths we’ve never known before, including the Great Lakes. A study conducted by scientists at the National Oceanic and Atmospheric Administration’s Great Lakes Environmental Research Laboratory (GLERL) used a 30-year data set to investigate how climate change is impacting the deepest parts of Lake Michigan, the world’s fourth-largest freshwater lake. “We found that this long-term data set not only confirms that Lake Michigan’s deep waters are warming, but also shows that winter is vanishing from them,” said Eric Anderson, the study’s lead author...”

Summer Could Last Half the Year by End of Century. NBC News explains the implications of new research and projections: “Summers in the Northern Hemisphere could last nearly six months by the year 2100 if global warming continues unchecked, according to a recent study that examined how climate change is affecting the pattern and duration of Earth’s seasons. The study, published last month in the journal Geophysical Research Letters, found that climate change is making summers hotter and longer while shrinking the three other seasons. Scientists say the irregularities could have a range of serious implications, affecting human health and agriculture to the environment…”

Lumber Shortage Linked to Rapidly-Changing Climate. Quartz connects the dots: “Lumber is in such short supply in the US that its prices have skyrocketed to an all-time high—so much so that the expense of building the average single-family home has risen by $24,000 since last April to reflect the cost of wood. The reason, in significant part, is the changing climate—and how it enabled a beetle species to infest forests in the Canadian province of British Columbia years ago. The steep rise in lumber prices illustrates the uncommon nature of the pandemic economy: a seizing-up of supply, but a constant simmer of demand that is now exploding as countries re-open. In the US, since the spring of 2020, the price of lumber has risen by more than 180%, according to the National Association of Home Builders (NAHB)...”

Climate Change Fuels Drought Across US, Makes Everything Worse: Climate Nexus has headlines and links: “A mega-drought worsened by climate change is creating and exacerbating problems across the Western U.S. as NOAA predicts precipitation levels below historical norms through June. NOAA’s official spring outlook, released late last week, predicts expanding and worsening drought from Louisiana to Oregon and unusually warm temperatures in almost the entire country — which in turn make drought worse. “We are predicting prolonged and widespread drought,” National Weather Service Deputy Director Mary Erickson told the AP. “It’s definitely something we’re watching and very concerned about.” Shrinking snowpack means even less water will be available for everything from drinking water to hydropower to irrigation, and reservoirs such as Lakes Mead and Powell are already at below-normal levels. Climate change exacerbates drought in multiple ways, including by creating weather patterns that, “leav[e] the southwestern states mostly warm, dry, and prone to wildfires,’’ Jennifer Francis, a senior scientist at the Woodwell Climate Research Center, told Bloomberg.” (Drought: Bloomberg $; Spring outlook: AP, CNN, The Hill; Climate Signals background: Drought, Wildfires)

For These Young Evangelical Activists, Facing the Climate Crisis is An Act of Faith. Here’s a clip from a Rolling Stone story: “…This is my sacrament,” says Sarah Herring, 23, another YECA field organizer. “The environment is one of the most powerful tools, if not the most powerful tool of connecting with the creator. That’s why I’m so passionate about my activism.” Says Meyaard-Schaap, “We’re doing this not because we’re environmentalists, not because we’re Democrats or Republicans. We’re doing this because we’re Christians, because we’re trying to follow Jesus and we think this is part of what that means.” Finding that connection between faith and climate activism can be a painful process. The climate crisis is a source of deep anxiety for most anyone who has a passing understanding of its potential impact, but for many young evangelical activists, it also means confronting the fact that they were misinformed by people and institutions they loved and trusted…”

How Well Does the Media Cover the Climate Movement? Here’s an excerpt of a post at The Columbia Journalism Review: “…Media coverage of the climate crisis has long lagged behind warnings from scientists and other experts—especially in the US, where coverage was sporadic at best, and often descended into a scientifically indefensible bothsidesism that portrayed corporate flaks and real scientists as equally credible. Improved news coverage overlaps with the emergence of the youth climate movement: According to a 2020 analysis by the watchdog outfit Media Matters for America, the outpouring of climate activism in 2019—especially a global youth strike in September of that year, led by Thunberg and involving some 6 million people—was largely what finally shocked the media out of their collective climate silence. In other words, despite a wealth of evidence establishing climate change as a story of massive, global importance, many news organizations still needed to be led out of the darkness…”