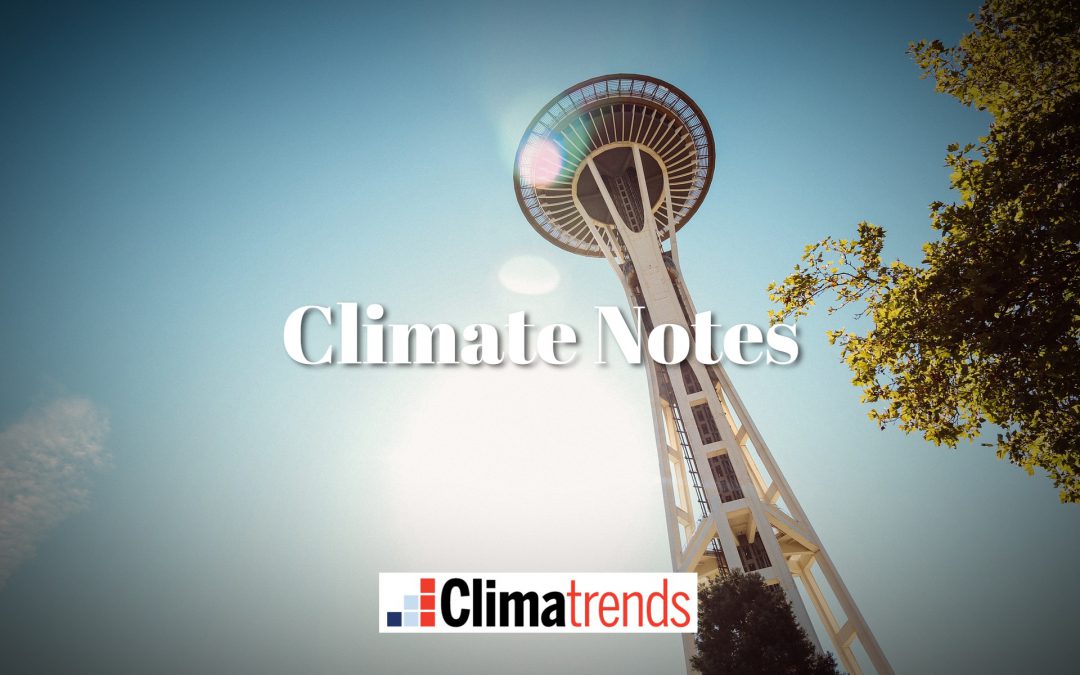 Climate Change Drove Western Heat Wave’s Extreme Records, Analysis Finds. The New York Times (paywall) reports: “The extraordinary heat wave that scorched the Pacific Northwest last week would almost certainly not have occurred without global warming, an international team of climate researchers said Wednesday. Temperatures were so extreme — including readings of 116 degrees Fahrenheit in Portland, Ore., and a Canadian record of 121 in British Columbia — that the researchers had difficulty saying just how rare the heat wave was. But they estimated that in any given year there was only a 0.1 percent chance of such an intense heat wave occurring…”

Leaked U.N. Report Warns of Climate Tipping Points. A story at Salon caught my eye; here’s the intro: “A draft version of an upcoming report from the United Nations climate science advisory body, the Intergovernmental Panel on Climate Change, scheduled for release in February 2022, was leaked this week to Agence France-Presse. It illustrates the existential risks posed by climate change to life on earth — and climate tipping points loom large. Climate tipping points are the phenomenon by which small increases in temperature can trigger self-perpetuating loops in the natural world, “tipping” them towards dramatic and widespread change after a certain temperature threshold is crossed — sometimes leading to even more emissions and warming. Examples of tipping points include the feedback between rising temperatures and permafrost melt; as the Arctic warms, frozen soils rich in organic carbon known as permafrost start to thaw, releasing the stores of ancient carbon locked inside. Other examples include the melting of the Greenland ice sheet, the collapse of coral reef ecosystems, and the potential transition of the Amazon rainforest into a more savanna-like ecosystem…”

The Climate Crisis Will Create Two Classes: Those Who Can Flee, and Those Who Cannot. An Op-Ed at The Guardian caught my eye: “At an Independence Day party this weekend, a couple asked me if they should move from Colorado to Michigan because of growing drought and water shortages in the western US. I get these questions regularly and am both encouraged and dismayed by them. Encouraged because it suggests that the message about climate risks is finally getting out and people are beginning to reflect on the personal implications of those risks. Dismayed by the realization that the climate crisis is going to produce two classes of refugees: those with the freedom and financial resources to try, for a while at least, to flee from growing threats in advance, and those who will be left behind to suffer the consequences in the form of illness, death and destruction…”

Heat Waves Kill People, and Climate Change is Making It Much, Much Worse. National Geographic has the story; here’s a clip: “…A mountain of scientific research has shown that climate change is making heat waves longer, hotter, more likely, and more dangerous. A recent study published in Nature Climate Change adds additional detail by assessing the human cost of that extra heat: In June, a team of some 70 researchers reported that for the 732 sites on 6 continents they studied, on average, 37 percent of all heat-related deaths can be pinned directly on climate change. The study underscores the urgency with which we need to address human-caused climate change, says Ana Vicedo Cabrera, lead author of the study and a climate change epidemiologist at the University of Bern, in Switzerland…”

27 Ways a Heat Wave Can Kill You. Here’s an excerpt of new research at Circulation: Cardiovascular Quality and Outcomes: “Heat waves, sporadic events of extreme heat, pose a threat to human life. Deaths in excess of 70 000 people during the 2003 European heat wave, 10 000 people during the 2010 Russian heat wave, and high death tolls from numerous other heat waves1 are staggering demonstrations that extreme climatic conditions are already exceeding human thermoregulatory capacity. The area of the planet experiencing heat wave conditions similar to those that have killed people is expanding and is currently inhabited by ≈30% of the world’s human population.1 Because the planet will warm another 1°C by 2100 if we curtail greenhouse gases or 3.7°C if we do not, our choices for deadly heat are now between more of it or a lot more of it…”

Canadian Inferno: Northern Heat Exceeds Worst-Case Climate Models. The western heat wave in late June continues to draw plenty of attention from climate experts. The Guardian puts last week’s jaw-dropping heat into perspective: “…Carlo Buontempo, director of the Copernicus Climate Change Service, said there was a clear human fingerprint on this “very freakish” event. Without emissions from cars, farms, and industry, he said, the record temperatures in the western north Americas would be expected only once in tens of thousands of years, but the probability rises along with the levels of the greenhouse gas. “In the present-day climate, getting an extremely hot June is common and is likely to occur twice in three decades. However, an analysis from many computer models suggests that by the end of the century these extreme temperatures are more likely than not. Human influence is estimated to have increased the likelihood of a new record several thousand times.”

The Miami Building Collapse and Humanity’s Tragic Fight for the Future. WIRED.com asks the rhetorical question: is it too late on climate? I suspect the answer is no, at least the ability to avoid a worst case (RCP8.5) scenario: “…And here’s the part of all this that’ll make you cry: If a collapsing building that kills dozens of people is both warning and crisis—which is to say, too late to save anyone—so too are those wildfires and heat domes. Carbon dioxide persists in the atmosphere for centuries; climate change doesn’t manifest itself as disasters until it’s nearly too late to fix. And even those disastrous events somehow fail to focus us. Maybe this week’s extraordinary temperatures in the Pacific Northwest will shake policymakers loose from their lethargy. But why would they? Superstorms and hurricanes like Katrina and Sandy didn’t do it. The wildfires of 2020 didn’t do it. Seasonal flooding in Miami hasn’t done it. All those events and more were signals not of a system on the brink, but of one that’s already broken…”