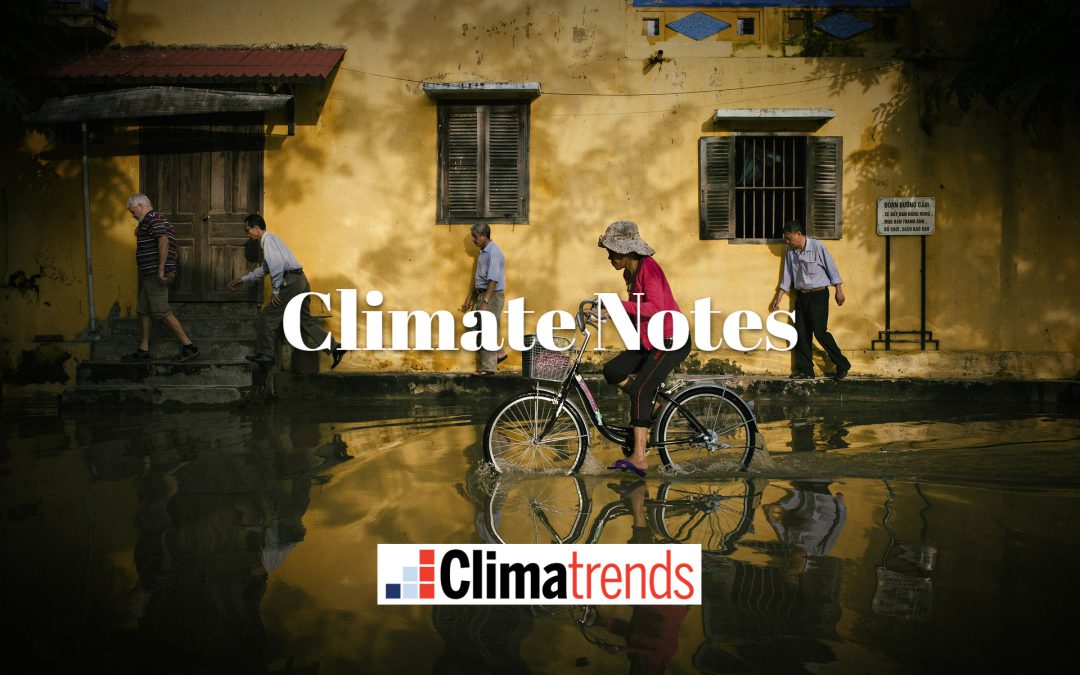 Germany’s Deadly Floods Were Up to 9 Times More Likely Because of Climate Change, Study Estimates. Record-shattering precipitation resulted in deadly flooding in Germany and Belgium this Summer and research suggests that climate change is a significant factor. CNN.com has details: “…The study, conducted by 39 scientists and researchers with the World Weather Attribution (WWA) project, also found that the most extreme rain was a once-in-400-year event, and that climate change increased the intensity of daily extreme rainfall by 3% to 19%. “These floods have shown us that even developed countries are not safe from severe impacts of extreme weather that we have seen and known to get worse with climate change,” Friederike Otto, the associate director of the Environmental Change Institute at the University of Oxford, said in a statement. “This is an urgent global challenge and we need to step up to it. The science is clear and has been for years…”

Climate Change is Making Storm Surge More Dangerous. As we enter the peak of hurricane season, this 2020 article on climate change’s impacts to hurricane comes to mind. We know that wind speeds often receive the most airtime, but the greatest risk from hurricanes is storm surge flooding and inland flooding as these massive storms come ashore. Research suggests that climate change is increasing the threat for deadly storm surge. Here’s an excerpt from a good explainer and infographic from CNN: “…If humans continue to emit heat-trapping gases into the atmosphere, scientists expect that sea levels will climb even higher, putting major cities at an even greater risk. Sea levels are now likely to rise more than 3 feet by 2100, according to the findings of a landmark report published last year by the UN’s Intergovernmental Panel on Climate Change. Generally speaking, a rise in sea levels of 2 to 3 feet would mean that a Category 1 hurricane could be capable of inflicting the kind of storm surge damage we would expect today from a Category 2 storm. In the Southeastern US alone, the annual cost of storm surge damage is projected to grow to $56 billion by 2050, according to the US government’s 2018 National Climate Assessment. And that’s even if global emissions of heat-trapping gases are moderately curbed in the next two decades…”

Tennessee Floods Show a Pressing Climate Danger Across America: Walls of Water. As in flash flooding like we haven’t witnessed before, according to research highlighted at The Washington Post (paywall): “…Tennessee’s flash floods underscore the peril climate change poses even in inland areas, where people once thought themselves immune. A warmer atmosphere that holds more water, combined with rapid development and crumbling infrastructure, is turning once-rare disasters into common occurrences. Yet Americans, who often associate global warming with melting glaciers and intense heat, are not prepared for the coming deluge. Inland flooding is the leading cause of death associated with tropical cyclones in the past 50 years, according to the Federal Emergency Management Agency. On average, damage from inland floods costs more than any other severe weather event. It’s a problem from the mountains of western North Carolina, where Tropical Storm Fred killed five people last week, to the streets of Dearborn, Mich., where heavy rains have repeatedly overwhelmed the sewer systems and destroyed homes…?

Can This Sun-Reflecting Fabric Help Fight Climate Change. WIRED.com (paywall) has details: “In 2020, a graduate student from Zhejiang University in China donned a seemingly plain white vest and sat in the direct sunlight for one hour. A few feet away, researchers monitored his body temperature with infrared cameras and sensors on his skin. Half of the vest was made from ordinary cotton; the other of metafabric, a new, experimental textile made of synthetic fibers and nanoparticles that reflect light and heat. After an hour in the sun, the half of the student covered in the metafabric was nearly 5 degrees Celsius cooler than the side covered by the cotton vest, researchers reported earlier this month in Science. Metafabric is the latest development in a broader emerging field of textiles for personal heat management, clothing that can heat or cool the wearer. Researchers hope that these textiles will not only enhance personal comfort, but reduce injury and death from extreme heat.

Study Finds “Very Concerning” 74% Increase in Deaths Associated with Extreme Heat Brought On By Climate Crisis. CNN.com has results of new research: “A pair of new studies out Thursday find a “very concerning” rise in the number of climate-related deaths and paint a picture of world where people struggle with regular temperature extremes. One of the studies finds the number of deaths caused by high temperatures increased by 74% globally between 1980 and 2016. Deaths related to extreme cold increased 31% since 1990, a new report, the first of its kind, finds. Human-caused climate change — generated by carbon, methane and other greenhouse gas emissions from industry, transportation, and agriculture — has led to a “new normal” with more days of extreme temperatures than in recorded history. The studies published Thursday provide more evidence that both hot and cold extremes can be deadly…”