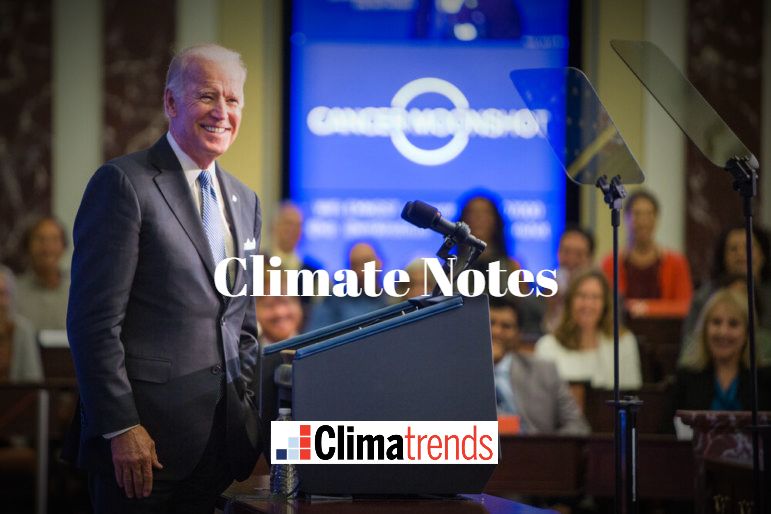 “The President Needs to Hit the Ground Running on Climate.” Here’s an excerpt of an Op-Ed from friend and climate scientist Michael Mann at The Bulletin of the Atomic Scientists: “…As a climate scientist, I know all too well that we are running out of time to avert climate catastrophe. In fact, we’ve already run out of time. It’s too late to protect everyone. From “zombie storms” in superheated oceans to wildfires so widespread and intense that they’re creating ‘smoke waves‘ that blanket the country, befoul the air and endanger public health, to an unprecedented Atlantic hurricane season that can be tied to a bathtub-warm tropical Atlantic, the past year alone has provided ample evidence that climate change is now an ongoing, rolling threat from one place to another. The carbon we either do or don’t choose to emit could shape not only the climate threats we must contend with in the decades ahead but those that loom over the next 10,000 years. At this point, it’s a matter now of limiting, rather than preventing, the damage...” Climate action is no longer optional.

Biden To Rescind Keystone, Rejoin Paris On Day One: President-elect Biden is expected to revoke permits for the Keystone XL pipeline as one of his first acts upon taking office Wednesday. The cancellation of the $8 billion pipeline would be a major victory to environmental advocates and Indigenous groups and a demonstration of Biden’s commitment to making climate actions a top priority of the new administration. Rescinding the cross-border permit would be just the latest twist in the project’s tumultuous, 15-year history. President Obama delayed construction in 2015 under pressure from protests led by Lakota and other Indigenous front line groups, only to see Trump reinstate it in 2017. This week, in an apparent – and seemingly unsuccessful – bid to get Biden to change his mind, TC Energy Energy Corp, the pipeline’s Canada-based developer, pledged to spend $1.7 billion to install renewable energy and eliminate all greenhouse gas emissions from the pipeline’s operations, as well as hire an all-union workforce to build it. By stopping the pipeline, Biden would be “showing courage and empathy to the farmers, ranchers and Tribal Nations who have dealt with an ongoing threat that disrupted their lives for over a decade.” Jane Kleeb, founder of the anti-pipeline group Bold Nebraska, told the Washington Post. “Today marks healing, hope, and a path for the clean energy that builds America back betterCBCWashington PostNew York TimesWall Street JournalReutersPoliticoThe GuardianBBCThe HillEartherClimate HomeTruthoutWall Street JournalCNNThe GuardianBloombergBloomberg

How Consumers Could Drive More Farmers to Fight Climate Change. IndyStar.com has the post; here’s an excerpt that caught my eye: “…Efforts are underway across the country to propel the idea of sustainable agriculture beyond the term “organic” and bring regenerative farming into the mainstream. This type of farming — which includes things like planting cover crops, not tilling the soil and grazing livestock on pasture — can build nutrients in the soil, prevent erosion and improve overall soil health. It also creates a vast carbon sink that pulls the greenhouse gas out of the air and stores it in the ground. But it doesn’t come without a complete overhaul to how farmers do what they’ve done their whole lives...”

Official Global Climate Data Now in ArcGIS Living Atlas of the World. A post at esri.com caught my eye: “…All of the top ten warmest years on record since the late 1800s have occurred since 2005. The top five have all been since 2015. Every year since 1977 has been warmer than the 20th Century average. You get the idea. Want to explore this data for yourself? Now you can by using Living Atlas of the World. Three new feature layers are available from the NOAAGlobalTemp dataset: the latest monthly temperature analysis, the full monthly archive from 1880 – present, and the annual average from 1880 – present. All of them compare the observed temperature to the 1971-2000 base period** (so -2oC means 2o cooler than the 1971-2000 average)…”

“After Alarmism.” Climate denialism is fading, now the question is how to reach (bipartisan) deals on climate action that accelerate a clean-energy economy and add more good-paying jobs in the energy sector. Here’s an excerpt of a post at Intelligencer: “…The change is much bigger than the turnover of American leadership. By the time the Biden presidency finds its footing in a vaccinated world, the bounds of climate possibility will have been remade. Just a half-decade ago, it was widely believed that a “business as usual” emissions path would bring the planet four or five degrees of warming — enough to make large parts of Earth effectively uninhabitable. Now, thanks to the rapid death of coal, the revolution in the price of renewable energy, and a global climate politics forged by a generational awakening, the expectation is for about three degrees. Recent pledges could bring us closer to two...”

2020 Was One of the Hottest Years on Record. WIRED.com (paywall) has an overview: “Earth was on fire last year (in case you forgot), with record-breaking West Coast wildfires, Siberian heat waves, and Atlantic hurricanes. Now government scientists have crunched the numbers behind the planetary chaos. NASA just released its yearly report on annual temperatures, and it says that 2020 surpassed or tied 2016 as the hottest year on record. A similar announcement by the National Oceanic Atmospheric Administration (NOAA) differed slightly, saying 2020 came in a close second or third. Both agencies presented their findings on Thursday during a virtual town hall at a meeting of the American Meteorological Society. The two agencies released their findings together, although they used slightly different methods to calculate their results…”

Most Democrats and Republicans Think the Government Should Make Climate Change a Priority. Some hopeful trends from VOX.com: “A new study has found widespread support for climate-friendly energy policies among registered Republicans and Democrats. The study, conducted by Yale University and George Mason University’s climate change communication programs, surveyed nearly 1,000 registered voters from across the political spectrum — Republicans, Democrats, and independents — in December. The survey found 53 percent of registered voters think global warming should be a high or very high priority for the president and Congress while 66 percent feel the same about developing clean energy sources. There was also broad support from both Democrats and Republicans for eight energy policies that would help address climate change...”