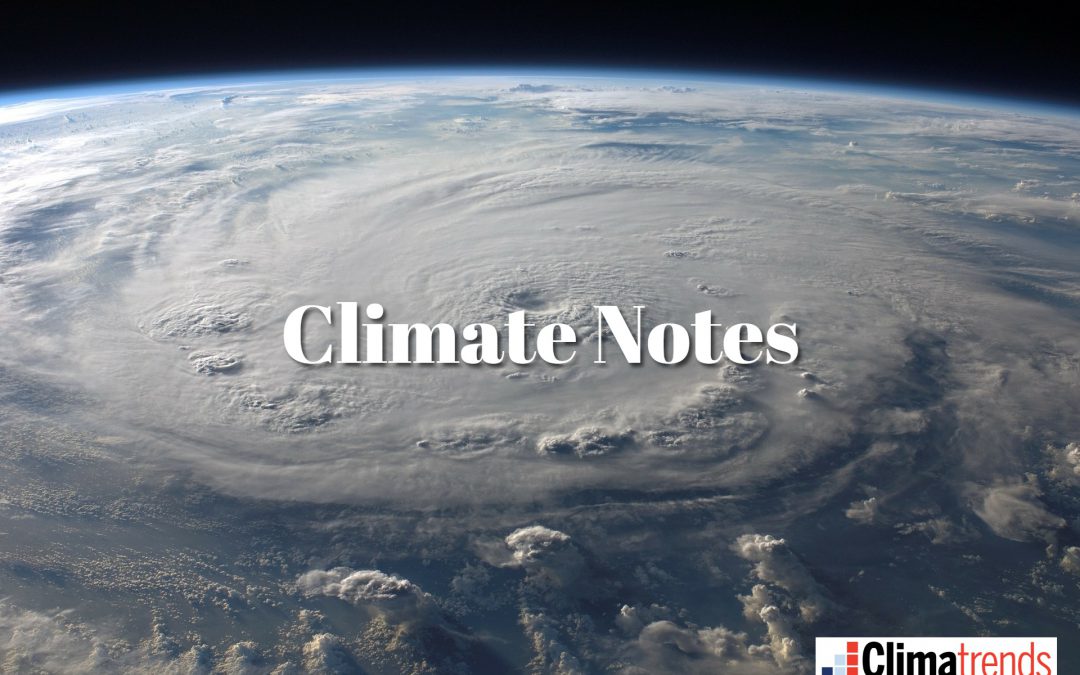 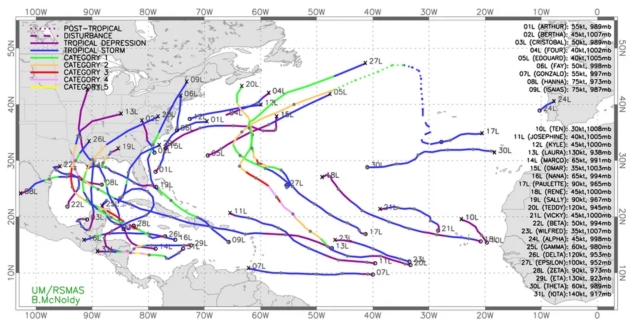 2020 Hurricane Season Raising More Concerns About Climate Change. The underlying culprit is warming oceans; 93% of the additional man-made warming related to GHG emissions is going into the world’s oceans. Here’s an excerpt from The Daily Climate discussing the impact of a warming climate on hurricane season: “…An important part of this season’s story is the Atlantic warming trend we’re witnessing, which is unprecedented going back at least several millennia. The oceans store much of the excess heat trapped by greenhouse gases. With greenhouse gas concentrations still increasing due to human activities, such as the burning of fossil fuels, average sea surface temperatures are likely to continue rising over the coming decades. Whether climate change caused the extremely high number of storms this season is unclear. There is no detectable trend in global hurricane frequency, and computer modeling studies have had conflicting results. However, the warming climate is increasing the threat posed by hurricanes in other ways...” Vulnerable businesses should assess their tropical risk as data suggest an impact on the hurricane season. 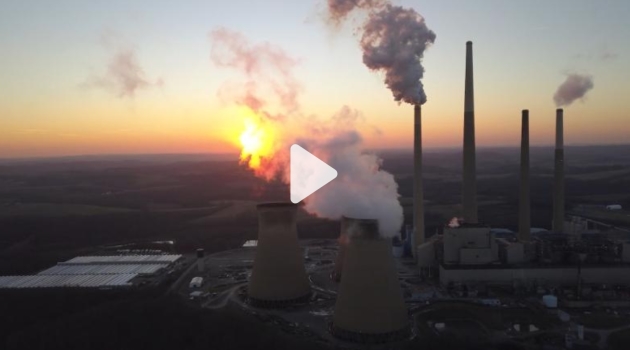 Turning Point on Climate Change? Countries Are Still Choosing Fossil Fuels Over Clean Energy, Report Says. Here’s the intro to an explainer at CNN.com: “Governments of the world are at a “critical juncture” for shaping the climate’s future but are on course to produce too many fossil fuels in the decade ahead, a new report has found. To limit global warming to 1.5 degrees Celsius (2.7 degrees Fahrenheit) — which scientists say would avoid the most catastrophic impacts of climate change — countries need to wind down their fossil fuel production by 6% every year between now and 2030, according to the 2020 Production Gap report. Instead, countries are on track to produce an increase of 2% per year. And as governments pour money into their economies in a bid to recover from the coronavirus pandemic, they risk locking the world into a climate disaster by investing more heavily in fossil fuel industries...” 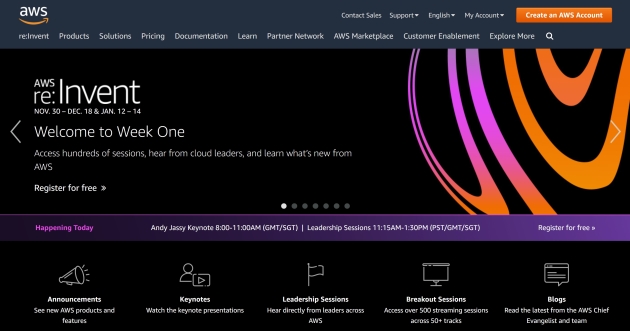 Climate Researchers Enlist Big Cloud Providers for Big Data Challenges. The Wall Street Journal (paywall) reports: “The cloud’s ability to chew through vast amounts of data using machine-learning algorithms is drawing in more researchers from the data-intensive world of climate science. “It’s a game-changer,” said Duncan Watson-Parris, a postdoctoral researcher at the University of Oxford. He is using cloud-based machine learning algorithms from Amazon Web Services to better understand how actual clouds are altered by aerosols, such as soot and sulfate, from cargo ships. And the shift hasn’t gone unnoticed by the Big Three cloud providers. AWS and others offer subscription-based remote data storage and online tools, and researchers say they can be an affordable alternative to setting up and maintaining their own hardware…”

Trees Can Help Slow Climate Change, But At a Cost. I stumbled upon an interesting press release at Ohio State News: “Widespread forest management and protections against deforestation can help mitigate climate change – but will come with a steep cost if deployed as broadly as policymakers have discussed, new research suggests. The study, published today in the journal Nature Communications, found that planting and protecting trees, especially in the tropics, could reduce carbon dioxide emissions by as much as 6 gigatons a year from 2025 to 2055. That reduction, the researchers’ economic model showed, would cost as much as $393 billion a year over the same time period. “There is a significant amount of carbon that can be sequestered through forests, but these costs aren’t zero,” said Brent Sohngen, co-author of the study and a professor of environmental economics at The Ohio State University…”

Shell Faces Dutch Court as Climate Change Activists Demand End to Emissions. Reuters reports: “Environmental activists took Royal Dutch Shell to court on Tuesday, demanding the energy firm drastically reduce the production of oil and gas to limit its effects on climate change. Seven activist groups, including Greenpeace and Friends of the Earth, filed the lawsuit in the Netherlands in April last year on behalf of more than 17,000 Dutch citizens who say the oil major is threatening human rights as it continues to invest billions in the production of fossil fuels. They are demanding that Shell cuts its greenhouse gas emissions almost in half by 2030 and to zero by 2050 – which would effectively force the Anglo-Dutch firm to quickly move away from oil and gas and direct its investment to sustainable sources of energy...” 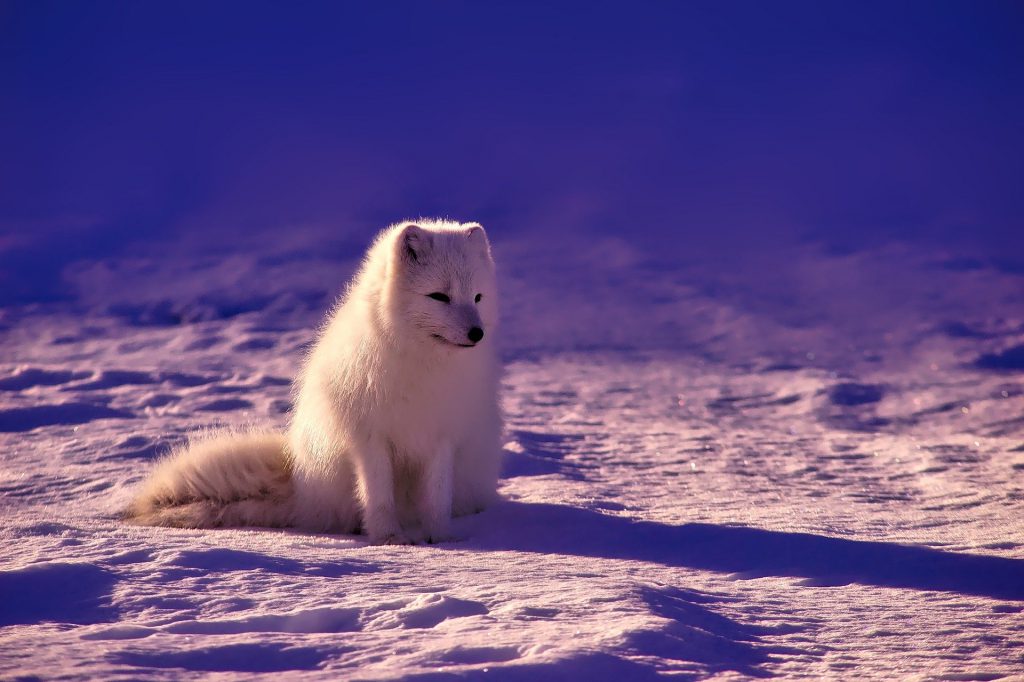 Every Major Bank Has Now Ruled Out Funding Arctic Drilling. Gizmodo has the latest: “…On Monday evening, Bank of America said that it will no longer finance fossil fuel exploration in the Arctic, joining Goldman Sachs, Morgan Stanley, Chase, Wells Fargo, and CitiBank, which all announced similar policies this year. That means no major U.S. bank will fund oil and gas production in the region anymore. The news follows years of public pressure from climate organizers for companies to stop enabling Arctic drilling. The movement heated up since last fall when a coalition launched Stop the Money Pipeline, a campaign to call out Wall Street firms’ role in particular. Bank of America’s decision came at a crucial moment…”